Home health & safety How Long Are Little Dogs Pregnant For?

How Long Are Little Dogs Pregnant For?

You little dog is pregnant and you’re wondering how long to wait. Will it be the same time to wait for a normal size dog or are there any differences in waiting times? Are there any other bits of information you might need to know concerning little dogs being pregnant?

On average, a dog that is having a small litter has the potential to remain pregnant a little longer since fewer puppies ultimately means more room in the uterus. On the other hand, a dog that is having a large litter is likely to deliver a little earlier since the pups run out of room quicker and trigger labor sooner. The average litter size will depend on breed but for a general idea, Yorkshire Terriers and Chihuahuas tend to have between two and five puppies while Labrador Retrievers have around seven puppies.

It goes without saying if your little dog is pregnant then it’s highly recommended to visit your vet to make sure your dog is healthy and there are no issues concerning the pregnancy.

If you are breeding your dog, you probably know exactly when they got pregnant. If you are unsure of when your dog has gotten herself pregnant, it might be a good idea to consult your vet to determine how far along into her pregnancy she is and check the health of both mother and pups.

Ways to estimate length of pregnancy

There are indicators to suggest how far along in the pregnancy your little dog is. Of course every dog is different even within breeds. The following is a guide through the weeks and pregnancy symptoms you might encounter or look out for in the weeks and days to come.

Although morning sickness doesn’t affect all dogs it is a good indication of how long your dog has been pregnant. If you dog does get morning sickness this will likely mean your dog will about 3 to 4 weeks into her pregnancy. Around this time your dog will probably feel lethargic and may eat less at meal time. Eating less doesn’t mean their appetite has lessened. In fact it will likely increase. Meaning that having one big meal at the end of the day may not be ideal. A better way is to reduce the meal size to smaller portions and given more meals throughout the day. Besides your dog feeling less inclined to do activity they may also feel more affectionate. More inclined to sit by your side or feel the need for a few extra pats. Don’t also be surprised if there is a little bit of clear vaginal discharge as this is perfectly normal.

By day 40 your dog should start to develop larger breasts and her nipples will become darker. Of course her belly will have enlarged by now becoming slightly firm to touch. Occasionally a dribble of milk may leak out of your dog’s nipples which is perfectly normal. Appetite maybe continue to increase however may drop later in the weeks. It is still recommended to have smaller meals throughout the day rather than one larger meal at night.

Towards the end of week eight you should see some puppy movement in the abdomen. It is also possible you might see a decrease in appetite around week 8 so don’t be too surprised. Best to continue with small portions throughout the day. As also said in earlier weeks you might see a clear odorless vaginal discharge which is normal to see.

During the last part of your dog’s pregnancy you might notice the puppies inside begin to move about. More than likely you’re dog has about another 2 weeks or pregnancy before giving birth. Your vet may want to double check everything is ok and everyone is healthy. Your vet certainly will be able to see how many puppies there are and whether or not the size of the puppies will affect the type of birth that take place. If the size of the puppies are too large your vet may suggest a C-section for your dog to safely have the puppies.

The final 24 hours your dog goes into labor your dog may not feel like eating at all. It is also common for dogs in the final 24 hours for their body temperature to drop and for their waist to become slim as the puppies will be moving into the birth canal. Your little dog might begin to collect and gather soft materials to make a nest to give birth in. If you notice your dog doing this, she is probably getting very close to giving birth. Let her do what she needs to do to feel comfortable. You can try to give her a safe place to give birth but try to give her space if she starts to seem irritable.

Are there home pregnancy tests for dogs?

You’re in luck there are actually dog pregnancy tests which you can easily purchase online which will tell you with a high degree of accuracy whether or not your dog is pregnant. Most will require you to get a urine sample like this one here. So you may have to get your hands a little dirty performing this test.

Tests Veterinarians may do

A vet can a run a blood test on your dog to determine if your dog is pregnant. There is a particular hormone that will be present in the blood which will indicate pregnancy. However, there can be false negatives because blood tests will only pick this hormone at around 30 days into the pregnancy. In order to determine if your dog is pregnant before those 30 days, your vet will need to do additional testing.

This tool is the best way to find out if a dog is pregnant early on in the gestational period. They are able to see into your dog’s abdomen to physically see if your dog is pregnant. An ultrasound will normally be performed at the gestational age of 25 to 35 days. It will be able to pick up the heart beats of the puppies, thus letting you know how many puppies to expect in your dog’s litter.

The sacs that the developing puppies form within in early pregnancy can be felt from the outside. These sacs are filled with fluid and feel like a table tennis ball. As the puppies develop the sacs lose their shape and aren’t as easily felt past one month of gestation. After the first month, the uterus looks more floppy and can be mistaken for your dog getting becoming overweight as opposed to pregnant. Palpation is the cheapest way to determine a pregnancy but should only be performed by your vet.

Similar to an ultrasound, an X-ray can help determine how many puppies a female dog is pregnant with. An X-ray isn’t as effective as an ultrasound in early pregnancy however. Ultrasounds can pick up heart beats but X-rays will only be able to see the bones and skulls of puppies that are a bit further along in the gestational development.

The bones and skulls probably won’t become evident on X-rays until days 42 through 45. This test is important to determine how many puppies to expect in your dog’s litter. If you have a small dog and she is pregnant with a high number of puppies, you might elect to have a C-section to avoid problems during birth. Small dogs might have problems delivering too many puppies so consult your vet to determine if she is capable of delivering them on her own or if she will need assistance via C-section.

When Is A Dog Fertile?

If you are not a breeder, it is still possible for an unaltered female dog to get pregnant. If a female dog is in heat, her body is able to get pregnant because this means she is ovulating. Humans generally ovulate once per month and their fertile period is about 3 or 4 days each month.

Dogs do not ovulate as often but their fertile period is a bit longer than that of a female human. Depending on the dog and the breed, most female dogs go into heat once every six months and are fertile for around 18 to 21 days. That’s a big window of time to get pregnant! If your unaltered female dog is in contact with an unaltered male dog, there is a good chance she will end up pregnant. Be aware of this possibility if you are trying to avoid a surprise litter of puppies.

How Can You Tell If Your Dog Is Pregnant

Although we have already looked at a detailed description of a dog pregnancy and signs that might be shown during various stages, at a glance here are some basic points to look for to tell if your dog is pregnant. This may consist of some or many of these tell-tale signs.

A lot of the time, these symptoms aren’t all that noticeable until your dog is nearing delivery. The gestation period of small dogs is short in comparison to that of a human so the birth might sneak up on you rather quickly. 63 days isn’t a very long time to wait! If you haven’t purposely bread your dog to have puppies, you might not notice she’s expecting until right before birth.

If you do breed dogs, you know what to expect. It’s only about 2 to 3 months from conception until the birth of the puppies. Taking care of your dog by making sure she has the proper nutrition and lots of comfort will go a long way in making the pregnancy and birth easy for her.

As always, contact with your vet is advisable to make sure that firstly your dog is indeed pregnant and they can help ensure that she stays as healthy as possible through the pregnancy.

Can little dogs have puppies with big dogs?

Yes little dogs can have puppies with larger dogs. However this is certainly not advised or encouraged. Firstly if the male penis can severely damage a smaller female dogs vaginal opening. During coitus the males bulbus glandis swells up and in turn locks both female and male together. During birth this can also be life threating for the female as puppies may be too large to pass through the uterus and serious complications can arise. Lastly and perhaps overlooked is that you are breeding dogs which are not meant to be breed together. In other words you will be producing puppies/dogs which could have unwanted and adverse side effects which they will have to live with for the rest of their life.

How Much Should Small Dogs Eat?

Do Little Dogs Need to be Walked?

Are Little Dogs Allergic to Poultry?

How Much Should Small Dogs Eat?

Why Do Little Dogs Eat Poop? 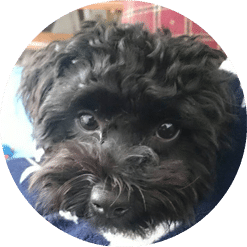 Welcome… well I’ll do my best to make you feel welcome. Here you’ll find all you need about little dogs. We are always trying to improve so let us know if you there is something you’d like to know and we’ll do our darnest to find out.